Back to Knowledge Centre

Understanding Vitamin D levels and how to stay sun safe.

Worried that you’re not getting enough vitamin D? Or too much? In this article, we discuss the signs of a vitamin D deficiency, debunk some common myths, and show you how to get your vitamin D levels right while still staying safe in the sun.

Known as ‘the sunshine vitamin’, Vitamin D is essential to our bodies. It enhances bone growth, boosts the immune system and is also believed to help reduce disease, while a Vitamin D deficiency can increase your risk of conditions such as osteoporosis and other potential ailments1.

Sun exposure is the easiest way to elevate your Vitamin D levels. However, Australia has one of the world’s highest rates of melanoma2, so we also need to protect our skin from the sun. So how do you do both – ensure you’re getting enough sun to maintain your vitamin D levels, yet avoid getting sunburnt and increasing your skin cancer risk? Read on and we’ll show you.

What are the benefits of vitamin D?

This essential, but often overlooked, vitamin has a myriad of health benefits. New research is constantly being released that supports the benefits of vitamin D, especially around treatment and prevention of osteoporosis and cardiovascular disease.3

Other studies claim that people with moderate vitamin D deficiency are more likely to suffer heart attack, stroke or heart failure than those with high levels of the vitamin5 – another very compelling reason to ensure your vitamin D levels are up to scratch!

Above: Vitamin D can be absorbed from foods such as oily fish.

How does your skin produce Vitamin D?

While small amounts of Vitamin D can be absorbed from foods such as oily fish, liver and eggs, the primary source of Vitamin D is sunlight, which helps your body manufacture vitamin D. The sun’s ultraviolet B (UVB) rays interact with a protein called 7-DHC in the skin, converting it into vitamin D3, the active form of vitamin D6.

Your skin needs a certain amount of sunlight to allow this important process to happen ... however, baking in the sun or using tanning beds is not the answer because it can increase your risk of sun damage and skin cancer, such as melanoma.

In fact, a whopping 90% of non-melanoma skin cancer is linked to sun exposure7, so choosing to get your vitamin D through too much sun exposure is to put it simply hugely dangerous. Instead, if your Vitamin D levels are low, experts recommend supplementing your diet with Vitamin D3 (the active form of Vitamin D), ideally at around 1000 iu a day.

Above: People who have low vitamin D levels can suffer from muscle aches, muscle weakness and bone pain.

Are you one of the nearly 75% of Aussies low in Vitamin D?

A new Australian study has revealed that nearly one-third of Australian adults are vitamin D deficient and nearly three quarters of all Australians have insufficient vitamin D levels – a surprisingly huge proportion when you consider our high sunshine levels!8

In the ground-breaking study, researchers assessed over 11,000 Australians from all around the country (aged 25+) for vitamin D deficiency. The results revealed that 31% of the group were vitamin D deficient, (22% of men and 39% of women). What’s more, 73 percent had levels below 75 nmol/l and four percent of the study group had vitamin D levels less than 25 nmol/l – which is considered extremely low.9

What are the signs of a Vitamin D deficiency?

People who have low vitamin D levels can suffer from a range of symptoms including muscle aches, muscle weakness and bone pain. In severe cases, by reducing calcium absorption, deficiency can lead to slower growth, bone softening and weakened bone structure, increasing the risk of osteoporosis, skeletal deformities and fractures10.

Above: To get daily dose of Vitamin enjoy the sunshine but don't forget to put SFP 30+ sunscreen every day.

How much sun exposure do I need to maintain normal vitamin D levels?

It all depends on how much sun you get. For those living in southern states of Australia, the Cancer Council recommends two to three hours of sun exposure per week at this time of year. Most people can achieve adequate levels by being outdoors with typical day-to-day activities – outside of peak UV periods, that is. 11

For those who get enough sun, Osteoporosis Australia says 400-800 IU of vitamin D daily will suffice. But for those who don't, they recommend taking around 800-2000 IU a day.12

Most people can maintain adequate vitamin D levels through regular, incidental exposure to the sun – just by spending a few minutes outdoors on most days of the week (during summer, when the UV Index is 3 or above ). However, it’s important to still take SunSmart measures because even a few minutes of incidental sun exposure all adds up to long-term sun damage and melanoma risk.

In late autumn and winter in some southern parts of Australia, when the UV Index falls below 3, it’s okay to spend time outdoors in the middle of the day with some skin uncovered. Being physically active (e.g. gardening or going for a brisk walk) can also help elevate vitamin D levels.13

In a nutshell, no. It’s a common myth that the best way to obtain enough Vitamin D is through unprotected sun exposure – however, that can lead to a whole other set of issues, including sun damage and an increased skin cancer risk.

However, sensible sun protection DOES NOT put people at risk of vitamin D dificiency3, while unprotected sun exposure puts you at risk of all types of skin cancer including melanoma, the fastest-growing and most life-threatening type of skin cancer.

In fact, the World Health Organization has identified solar UV radiation as a proven carcinogen, with studies linking it to about 90 percent of non-melanoma skin cancers and about 86 percent of melanomas, as well as premature skin aging.14

In Australia, we need to balance the risk of skin cancer from too much sun exposure with maintaining adequate vitamin D levels. In fact, new sunscreen guidelines for both Australia and New Zealand recommend that we should be applying a broad-spectrum, SFP 30+ sunscreen every day when the UV index is predicted to reach 3 or above1.

So if you want to get your daily dose of Vitamin D, enjoy the sunshine before 10am and after 4pm during the summer months (or anytime the UV index is predicted to be under 3) – with su

Above: Elderly are most at risk of Vitamin D deficiency.

Can your body still produce Vitamin D if you’re wearing sunscreen?
We know that sunscreen can reduce the damaging effects of the sun, but it’s commonly believed that it might inhibit the body's production of vitamin D. However, in a new study, participants showed an increase of vitamin D in participants during a week of cloudless weather, with a very high UV index, even when sunscreens were used properly and prevented sunburn.15

So short answer sunscreen won’t stop you getting an adequate intake of Vitamin D. Just make sure you get your dose of sunshine at the right time of day – most people can maintain adequate vitamin D levels by spending just a few minutes outdoors most days of the week.15

Who’s most at risk of Vitamin D deficiency?
The recent Australian study revealed certain population groups were more likely to be at risk than others: women, the elderly, those who are obese, those who do less than 2.5 hours of exercise per week, those with darker skins, and those who spend a lot of time indoors. Living in a southern Australian state was also a risk factor.16

So yes, more exposure to the sun is definitely a factor, as long as it’s not too much sun exposure!

What is a healthy level of vitamin D?

As a general guide, Osteoporosis Australia recommends most people should have a vitamin D level of at least 50 nmol/L at the end of winter, which means people may have levels 10 – 20 nmol/L higher during summer (60-70 nmol/L).17

This helpful Vitamin D chart gives you a guide to what’s normal and what’s not:

Below 30 nmol/L: You have a Vitamin D deficiency - ask your doctor about supplements.

30-50 nmol/L: Not adequate for bone and overall health – talk to your doctor about elevating your Vitamin D levels.

50 and above: Your levels are adequate – keep up what you’re doing.

125 and above: Your levels are too high – talk to your doctor.

Above: Exercising outdoors during safe times for sun exposure will also help you get some vitamin D-producing rays.

What can you do to maintain healthy vitamin D levels?

Next time you see your doctor, ask for a blood test to check your vitamin D levels. In most cases, a deficiency can be corrected with supplementation. Exercising outdoors during safe times for sun exposure (before 10am and after 4pm in the summer months) will also help you get some vitamin D-producing rays.

If you have low vitamin D levels, you may need to take a regular supplement. Available as tablets, capsules, drops or liquid, most vitamin D supplements are ‘D3’ and the dose on the product is shown in International Units (IU). Your doctor will advise you on the right dose for you, and your pharmacist can also provide general advice on vitamin D supplements. 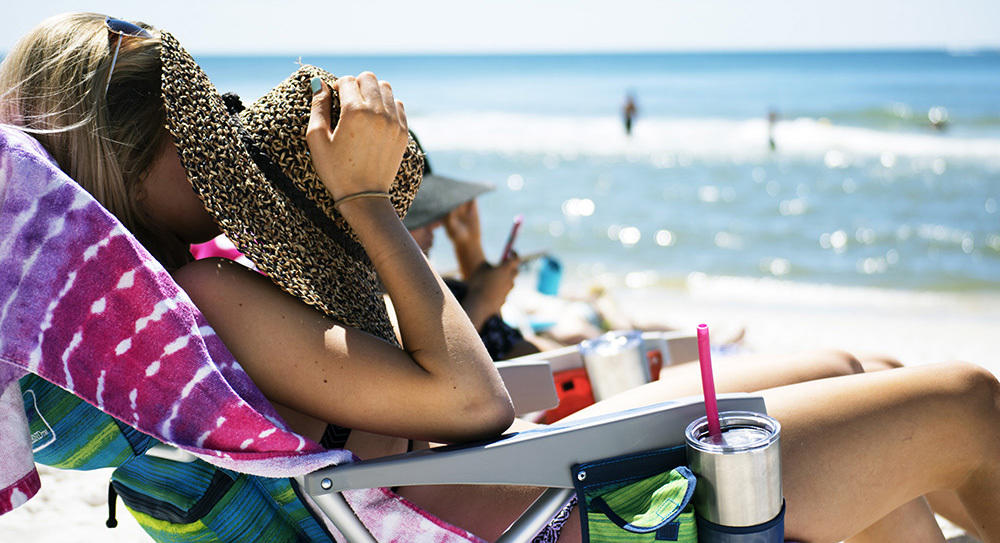 Above: Over-exposure to the sun is never recommended, even if you have a vitamin D deficiency.

Vitamin D levels and sunshine levels – how much is too much?

Adequate levels of vitamin D can be restored by sunlight surprisingly quickly. Just a few days of careful sun exposure can make up for several days of no sunlight exposure18. Body fat acts like a kind of storage battery for vitamin D: storing it during periods of sunlight and releasing it when sunlight is gone.

However, over-exposure to the sun is NEVER recommended, even if you have a vitamin D deficiency – because of the increased risk of skin cancer, including melanoma. If you are concerned about your vitamin D levels, speak to your doctor who may advise supplementation.

If your Vitamin D levels are low, aim to get just a little sun exposure every day – ideally in the early morning or late afternoon – rather than going all out and frying your skin in the midday sun!

And if you’re concerned that you’ve been getting too much sun, we recommend having a thorough check-up of your skin and moles every year, such as a Full Body MoleMap, to detect any signs of skin cancer early – when it’s most treatable.

Are there any side effects of taking vitamin D tablets?

Most people do not commonly experience side effects with vitamin D supplements, unless too much is taken. Some side effects of taking too much vitamin D include weakness, fatigue, sleepiness, headache, loss of appetite, dry mouth, metallic taste, nausea, vomiting, and others.19

Before taking vitamin D supplements, we recommend checking with your doctor to check your Vitamin D levels and to see whether you need supplements – or whether you simply need a little more (careful) sun exposure.

You’re all signed up, thanks!